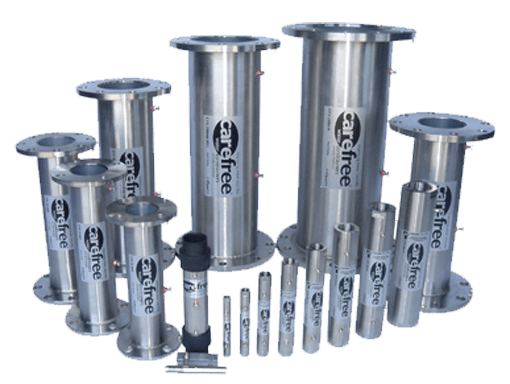 Range of sizes to suit your flow rate

The Club at Olde Cypress in Naples, Florida experienced a flow restriction in the irrigation system. A build up had formed inside the PVC piping and severely limited the water flow (shown below). Fairway areas of the golf course which traditionally had 10 to 12 sprinkler heads operating at one time had now been reduced to 2 or 3 heads because of the limited flow. Olde Cypress inquired about the Care-Free Water Conditioner technology as a solution to eliminating the build up in their system.

The build up was analysed and it was determined that the deposits were predominantly calcium based. Care-Free Water Conditioners have been used successfully in the residential market for decades for calcium. A trial was set up to treat approximately three holes of the golf course with a water conditioner. Evaluations would be made on this section of pipe to determine if the treatment was successful.

A 100mm Care-Free Water Conditioner with power regulator was fitted on one of the lateral irrigation lines. This section of piping would flow to approximately three fairways on the golf course. On this piping network, there is a mitigation area so that water and sediment could be purged from the system.

After eight weeks of continuous treatment, the flow to this section of the golf course returned to normal. During this period, build up was purged from the system. There was no adverse effect on the irrigation piping, sprinkler heads or control valves.

At the completion of this trial, the club purchased a 200mm Care-Free Water Conditioner to handle flows of 6,810 L/min. It was fitted to the discharge side of the irrigation pump station and now treats the water for the entire golf course. 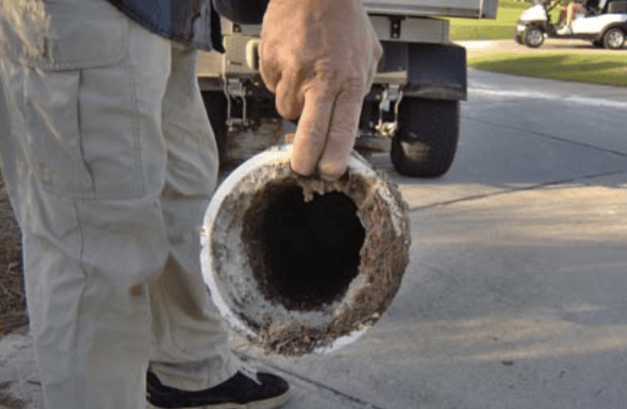 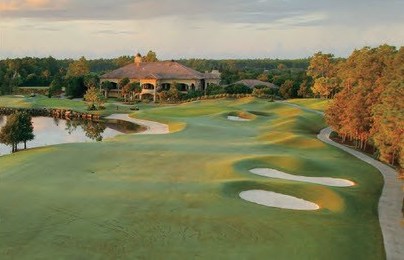 The Club faced a unique challenge with the pipe build up issue. Build up could have been removed with a chemical wash, but ultimately that chemical would have to be collected and disposed of because of environmental concerns. Secondly, the irrigation piping could have been replaced. These options would have involved risk to the environment and disruption to the golf course. The Club chose the Care-Free Water Conditioner as the preferred method of treatment.

The Care-Free Water Conditioner has provided a solution to control build up in irrigation piping.

The Boca Grove Plantation in Boca Raton, Florida uses a combination of well water and surface runoff to irrigate the grounds and golf course. The irrigation water is “hard” (high mineral content) and contains bicarbonates at levels of 200-400 ppm. The pH of the water ranges from 7.5-7.9. Calcium and Magnesium are bound by the bicarbonate and thus not plant available. Nutrient availability in the soil is poor given the above conditions.

Boca Grove had used sulfur burner technology to reduce the high pH of the irrigation water and bicarbonate levels. The unit was aging and in need of replacement. They inquired about the water conditioner technology as an alternative.

Irrigation water is pumped from a chain of lakes that are located on the property. An 200mm Care-Free Water Conditioner was connected to the discharge of the irrigation pump station. The unit was fitted with a power regulator. Flow rate through the unit is approximately 6,250 L/min.

Below are the various values for water, soil and plant tissue testing at the site.

To summarise, in the four month period:

Visual results of the turf confirmed the improvement in the soil.

It was a dry spring and water restrictions were imposed. In fact, county water authorities conducted an unannounced visit to the golf course to find out how Boca Grove was able to stay so “green” compared to neighbouring courses.

In addition to managing the high bicarbonate water, the Care-Free Water Conditioner proved to be a cost savings over the traditional treatment. A cost analysis of the two technologies is shown below.

Given the data above, the Care-Free Water Conditioner has provided an alternative means to control high pH, high bicarbonate water at a lower cost than traditional treatment.

Once a Care-Free is installed, you’ll find that the better ‘wetting action’ of conditioned water improves soil texture. Not only does soil become more permeable but it is able to retain its moisture content for longer periods.

By improving permeability, unwanted salts which previously accumulated around the root zone and in the soil, are flushed well below the roots and do not reform. With a reduction in Sodium and Chloride levels in the soil, stressing to the turf is relieved allowing a root mass increase of about three times.

The Gundagai Golf Course uses effluent water to irrigate. However it caused a $10,000 annual maintenance problem. Every sprinkler on the course had to be hand cleaned every two weeks to remove blockages. Injection systems were considered but were too costly to maintain.

The Care-Free Water Conditioner provided a cost-effective solution to their problem and cost a fraction of the price of alternatives.

Top right: Not a sign of algal growth on sprinkler heads
Bottom right: 100mm Care-Free Conditioner installed into a 150mm line at the golf course 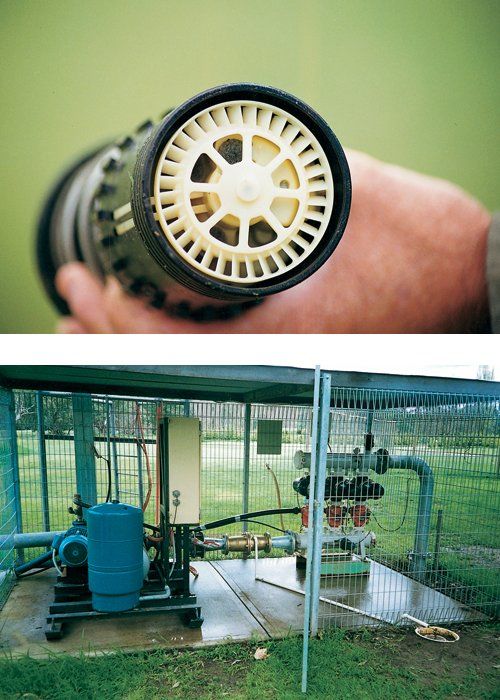 Rising salinity at Wagga Wagga Golf Club played havoc with the course for several years despite the good river water used for irrigation.

The club agreed to set up a trial area using Care-Free to determine the effect on the surface salts killing the grass.

All treatment to the test area ceased during the trial.

40mm Care-Free Water Conditioner is fitted at the sprinkler head.

Sodium in the soil lowered to 25%.

Australian government scientists visited the golf club and took samples of the treated and untreated areas.

They were amazed at what they found.

Salts were not only significantly lower in the Care-Free treated area, but were in a completely different form to that of the control area.

The lake on Macintosh Island Park in Surfers Paradise was one of the problem areas. Algal growth, turbid water with zero visibility and water staining were spoiling the lakes attraction.

Council had implemented several measures but were unable to provide a viable cost effective solution.

After being made aware of the benefits which the Care-Free Conditioner offered it was decided to install a 150mm unit into the lakes re-circulation line.

During the next few weeks the “problems” were clearly fading away.

The works manager, Mark Bartlett said, “The only regret we have is that we did not paint the white return line on the bottom of the lake because the water is now so clear that the pipe is very noticeable.”

As you can imagine the Gold Coast City Council is pleased with their investment. 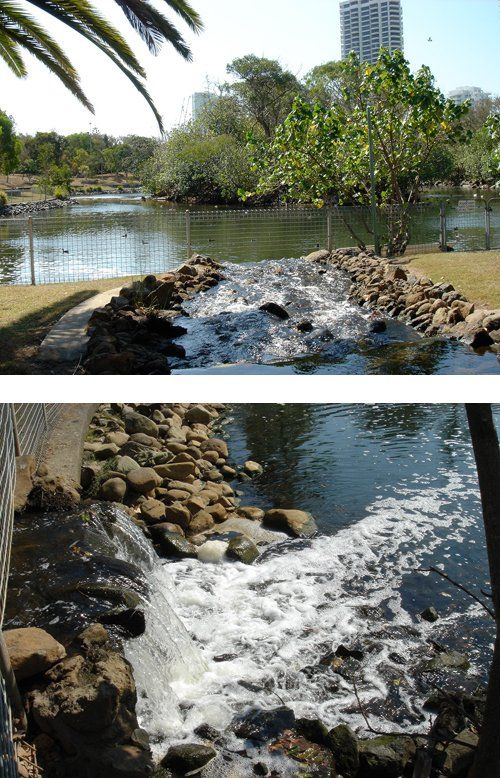 Translation from an article published in Golf Journal 2005; South Korea. 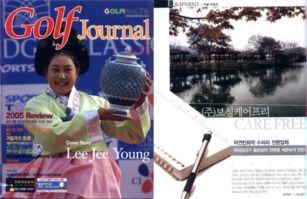 Mr. Keum Lee Seok, president of Bosung Care-Free, which specializes in water purification system, made a special suggestion to Golf Journal. The company was scheduled to have a testing of their water purification system at the KRA (Korean Racing Association) Kwachun Racing Park for about a month starting from October 13, 2005, and he wanted us (Golf Journal) to do an exclusive coverage of it.

Kwachun Racing Park is a comprehensive entertainment centre where people enjoy horse racing as well as beautiful scenery and amenities. It can be a place for a picnic for preschoolers and families and various events such as traditional wedding, sports events for companies and groups, live performances and horseback riding.

The company installed the water purification equipment (the Care-Free Water Conditioner) today and started to run it. As we were briefed, the pond was covered with a thick layer of green algae and the water was so murky that we couldn’t even see the fish in the water. Furthermore, the fishy smell was coming out of the water, making it impossible to enjoy the beauty of the surrounding and the pond itself.

A preschooler at the park said, “Teacher, the water in this pond looks like dead water.”

Today is Saturday and a lot of people gathered by the pond for a traditional wedding.

A thick colour of green algae is clearly visible even from the falling water, bubbles float over the surface of the pond, and a fishy smell is everywhere.

It looks like a firm leased the playground at the Racing Park for a day and has a fall sports event. People are running and cheering and it looks fun.

It’s been five days now since the Care-Free system was installed. Mr. Lee says that the water is changing, but it’s not that obvious to my non-expert eye. Movement of the carp in the water looks more active anyway…

It’s the tenth day since the installation of the Care-Free system.

The amount of green algae seen from the waterfall and the fountain was clearly decreased and the fishy smell has been completely gone. However, the colour of the pond still looks the same…

Green algae in the pond have been evidently decreased and the movement of the fish is livelier than before. A ranger at the park was amazed and said “It’s the first time that I can see the fish so clearly, and the fishy smell that was here during the summer has been gone.” It’s been warm, but yesterday’s rainfall turned the air cooler. The colours of autumn leaves around the pond look lovely.

It was early in the morning, but Mr. Lee was very excited already. He said that the water had become clear and even the fixtures at the bottom of the pond could be seen. He was getting visible result after 17 days since the installation of the Care-Free system. But a staff member at the Racing Park warned not to be 100% sure yet. It might be a drop in temperature that caused the decrease in activities of algae.

It made us wonder…

Now it’s November. The condition of the pond dramatically changed. We can see the bottom of the pond very clearly. The golf balls that we threw in are also clearly visible. Autumn leaves keep falling onto the transparent pond.

Today is the last day of testing of the Care-Free system. The colour of the water in the pond looks natural as if it had got a new life.

Only to see if the drop in temperature affected the change, a staff member of the park, Mr. Lee and the reporter of the Journal visited college campuses in Seoul and Kyongki-Do.

And we all reached the conclusion that this project has been a great success.

Regardless of the drop in temperature, the ponds on the campuses were at the condition similar to that of the pond at the Racing Park before the installation of the Care-Free system.

These data showed the results consistent to what we witnessed.